Savong just sent me this photo, and it tells me three stories. The first story is about the children who are supported through the SOC. There they stand – a fun community of friends. I’ve seen first hand how some of these children from very poor backgrounds have gained in health and grown in confidence.

The second story is about great progress this past 12 months, with new buildings, new roofing, new footpaths and now a new sign to ‘crown’ the achievements of 2013.

Finally the sign itself tells a big story. It demonstrates the coming shift in the work of SOC – with a focus on outreach and support for children in the local community. This includes meals, support with education and other assistance.

One of the standing jokes I have with the SOC students in Cambodia is how I mysteriously lost two toes on my right foot. I offer all kinds of explanations (tigers, sharks, crocodiles) but none of the students ever believe me. “You lie!” they laugh at  me. “Tell us what really happened.”

One day I met the parents of one of the students – on the left – and his father showed me the scars he suffered as a 16 year old when Pol Pot came to power. A bullet wound had fractured his wrist, while sniper fire had ripped a scar across a calf muscle. And even his right foot bore the marks of the conflict – a landmine I think – because his big toe was missing. The student and his friends urged me to show his dad my foot – so I took off my sandal and revealed my own tragic right foot. The two of us men laughed in recognition (he’s almost the same age as me) then we stopped laughing as if on cue. Clouds gathered over our cross-cultural “snap!” moment. They were the clouds of war, and of terror and of bitter memories. On the surface our wounds were similar, but mine were superficial, while his went right back to his heart. 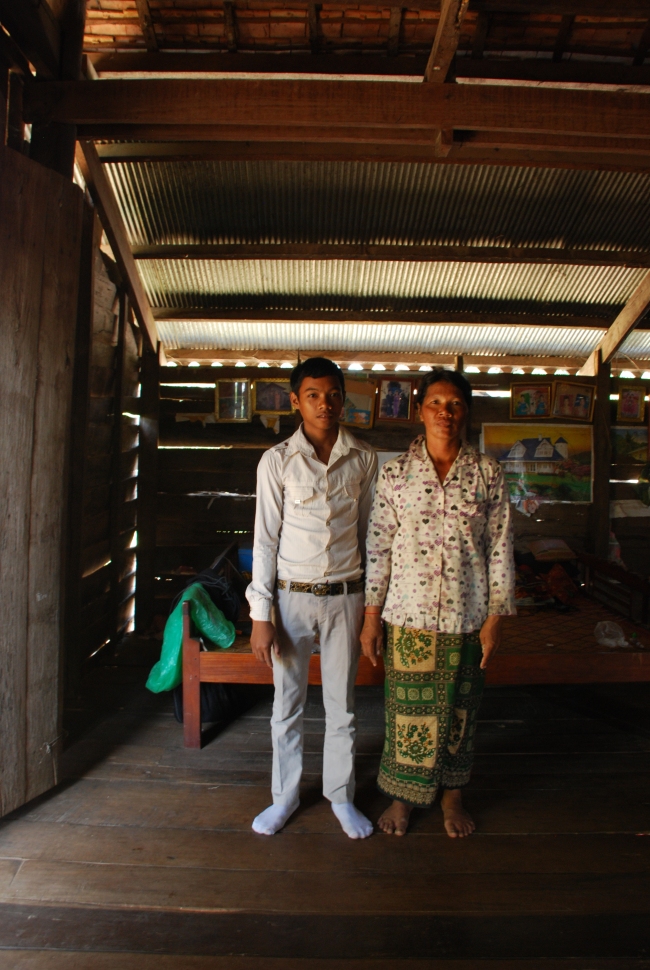 The photo above shows one of the new sponsored boys at the children’s home supported by my friend Savong’s organisation: SOC. The main objective of the organisation is to provide free education to students in order that they reach their academic and vocational potential. The language school was always the primary activity, but since 2008 Savong has provided a home for students whose parents are unable to support their children through school. Just recently 7 new students asked for such housing assistance.

Asked for? One of the boys, Mouencheat had found us via the family cellphone which in Cambodia is cheap enough ($20 something US dollars) but also smart enough that he was able to FaceBook us to make initial contact while he stood in a rice paddy during planting season. I’ve documented Mouencheat’s story elsewhere; how after he contacted me I asked Savong to make the trek out to the village, 40 kms away, and to interview the family. Circumstances were tough for the mother and we found a kind sponsor in Singapore, Nicholas, to provide the educational support.

Two things happened. While Mouencheat was finishing off his academic year at his local high school, he told a few friends about what he had tapped into. A few of his friends also needed help.

Meanwhile Savong considered where the best academic help might be found for this diligent “Gang of Seven.”  Back in Bakong where the SOC has its home, the local High School (now renamed the Han Sen Bakong High School – clearly a flagship for Cambodia’s Prime Minister) as well as Savong’s School with its scholarships to University are both going from strength to strength. I’m guessing; but I doubt if there are too many rural districts in Cambodia as well served educationally.

So in the circumstances Savong discussed with the families about the students transferring to the SOC in Bakong for the new academic year. They did this willingly and so far, just a few weeks after moving, the students have settled in easily.

Last weekend I joined these students to visit their parents in Kampong Kdei, a journey we made in a seated pick-up truck. Between the students, their SOC friends, two drivers as well as volunteer Alex and myself we numbered at least 20: pretty standard in Cambodia.

We took off in the morning and headed East along Number 6 Highway which links Siem Reap to Phnom Penh to visit the parents and families one by one. The photo above comes from the first visit. We sat inside the one room farmhouse and what you see in the photo is pretty much all there is.

With the son’s help translating, I learned of their family livelihood – rice farming and of the mother’s hopes, beyond anything else that her children might get a proper education. I asked if life for her would be harder without her son home to assist, but she just repeated her belief that the children’s education comes first.

In fact she hoped that next year the SOC would be able to help her 15 year-old daughter as well. That’s the girl’s study area below.

What I was most conscious of on our journey was the sense that time and progress palpably slip backwards the further one travels from the cities. Kampong Kdei is the Cambodia I saw 10 years ago. Progress has not reached even this 40 km distance in that time. What we’re offering by bringing their children within reach of Siem Reap is an opportunity to go to University (give it two years: the students are in Grade 10). Between Mouencheat’s use of the internet, and our NGO we’ve helped speed up progress. 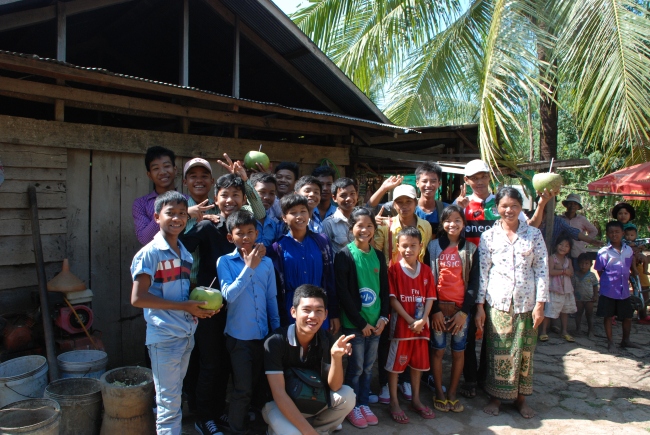 The boy’s mother was very generous – as were the parents of each student. We were plied with fresh coconuts, the milk tasting as sweet as dessert wine, and graciously treated. It was extremely humbling, but I am glad of this journey because it highlighted the importance placed on education. We owe it to these seven families, as well as those others we serve, to do our very very best to support them. 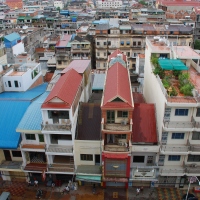