The measurement of literacy rates is extremely problematic in poorer nations so it doesn’t surprise me that the UNESCO figures have wandered around – in fact they went down somewhat from 2008 to 2009 – a blip I’d put down to methodology rather than some demographic or education system ‘event.’

The figures show a largely upward trend over the previous decade and given the fast population growth the literacy rate, if you measure it in sheer numbers represents a gain of close to 700,000 adults 15+ between 1998 and 2008. This still leaves at least half a million adults deemed illiterate.

In world terms this is still not a great figure. UNESCO ranks Cambodia and 108th in the world, rubbing shoulders with Uganda, the Solomon Islands, Guatemala and Iraq.

The Cambodian government, which defines literacy as:

A person is literate who can, with understanding in both reading and writing, make a short simple statement on his/her everyday life.

has set goals for improving the literacy rates and certainly the school system is where it starts. In Cambodia, according to 2008 Census figures 88% of adults 15-24 are literate, (89% of males, 86% of females) whereas the figure drops with each age group and the gap between females and males gets wider: (48% literacy amongst 65+ with  74% of males and 31% of females.) 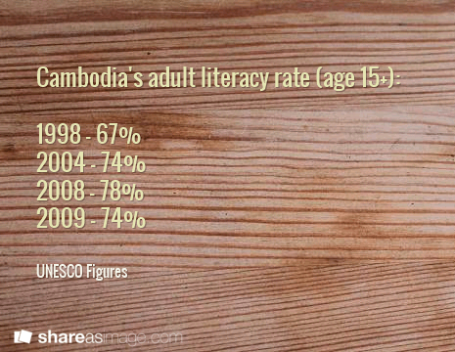